On April 14, 1931 Franklin Delano Roosevelt, Governor of NY wrote and signed a letter to SUNY ESF Dean Baker talking about hosting the NY and New England Society of the American Foresters at his home in Hyde Park. The letter also talks of Dean Baker going to Hyde Park in the future to discuss plans for plantings on the property. This letter is one of many that the SUNY ESF Archives has between FDR and a number of SUNY ESF Deans from the early 1900’s on and many of which are on White House stationary with FDR’s signature. Roosevelt and SUNY ESF were connected by Roosevelt’s love of developing the landscape of his home and estate – Hyde Park in NY https://www.nps.gov/hofr/index.htm and Roosevelt worked very closely with SUNY ESF to determine the selection, placement and management of plants and vegetation at Hyde Park.
George Curry, SUNY ESF Distinguished Teaching Professor Emeritus delivered a Dale L. Travis Lecture in 2015 on the SUNY ESF campus with a focus on the research conducted by SUNY ESF’s Department of Landscape Architecture's Center for Cultural Landscape Preservation at the Roosevelt Estate in Hyde Park, N.Y. The talk also focused on the evolution of the landscape of Hyde Park from when it came into the Roosevelt family in 1887 when James Roosevelt, FDR's father, purchased 110 acres.
To learn more about this lecture and to view the recording visit the Dale L. Travis Lecture series website https://www.youtube.com/watch?v=H0lIaPAwz7E
This TBT was brought to you by Jane Verostek, Associate Librarian, SUNY ESF, F. Franklin Moon Library. 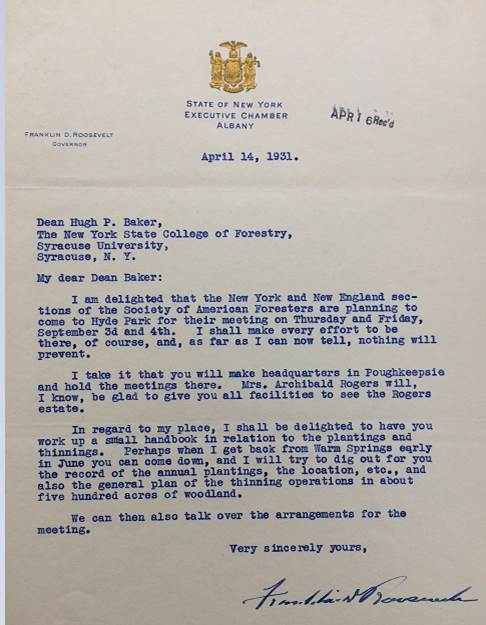 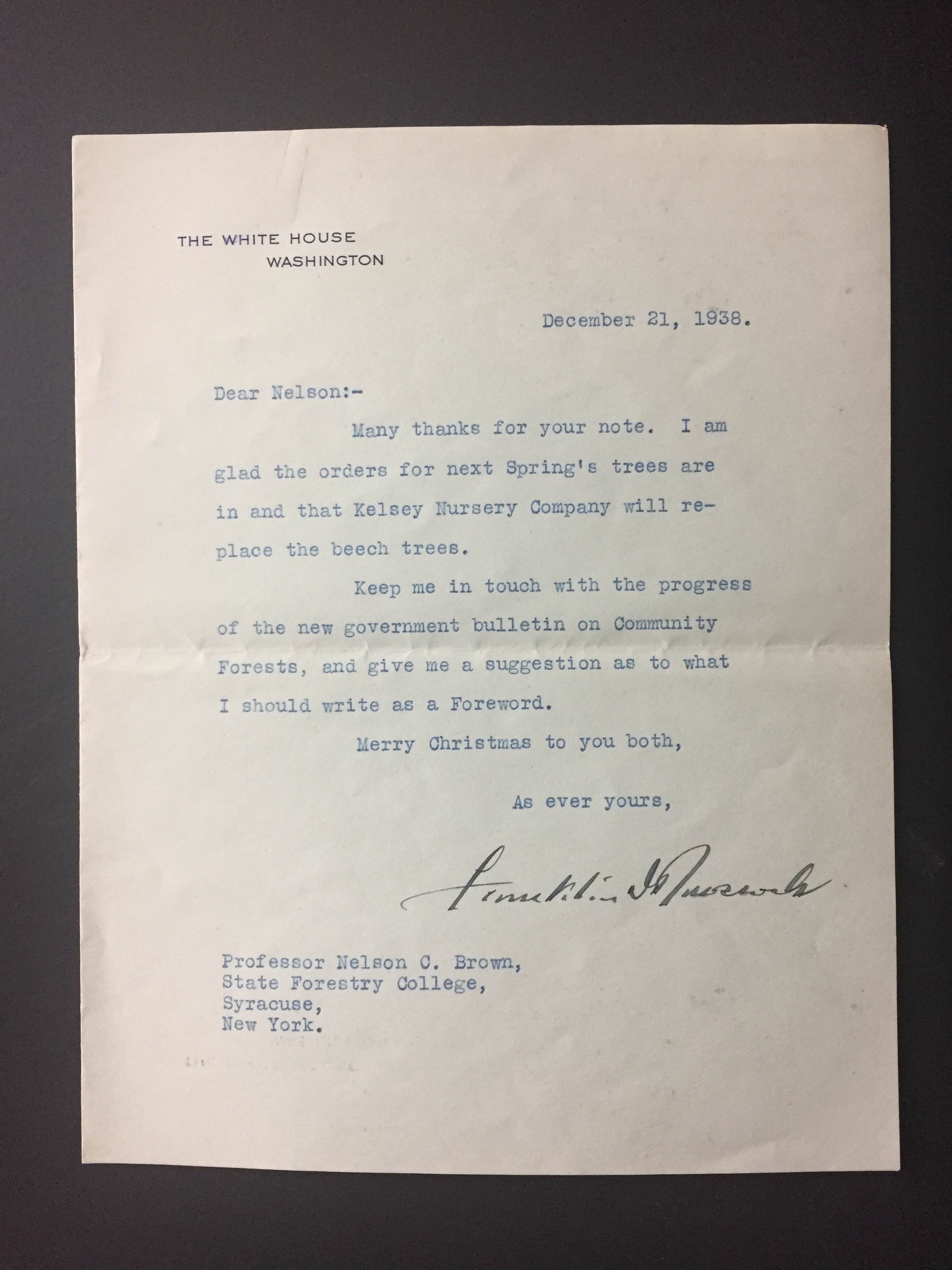 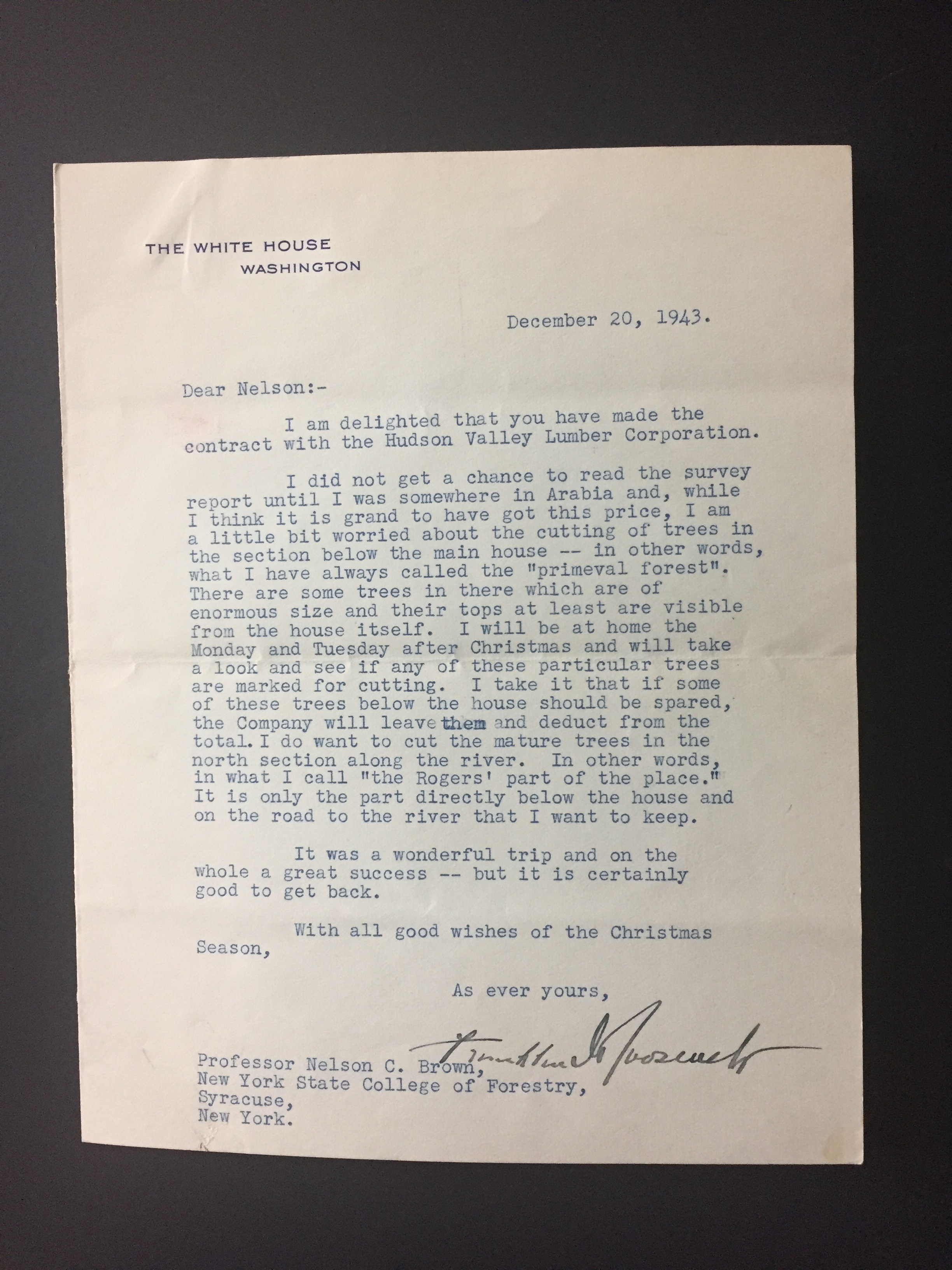 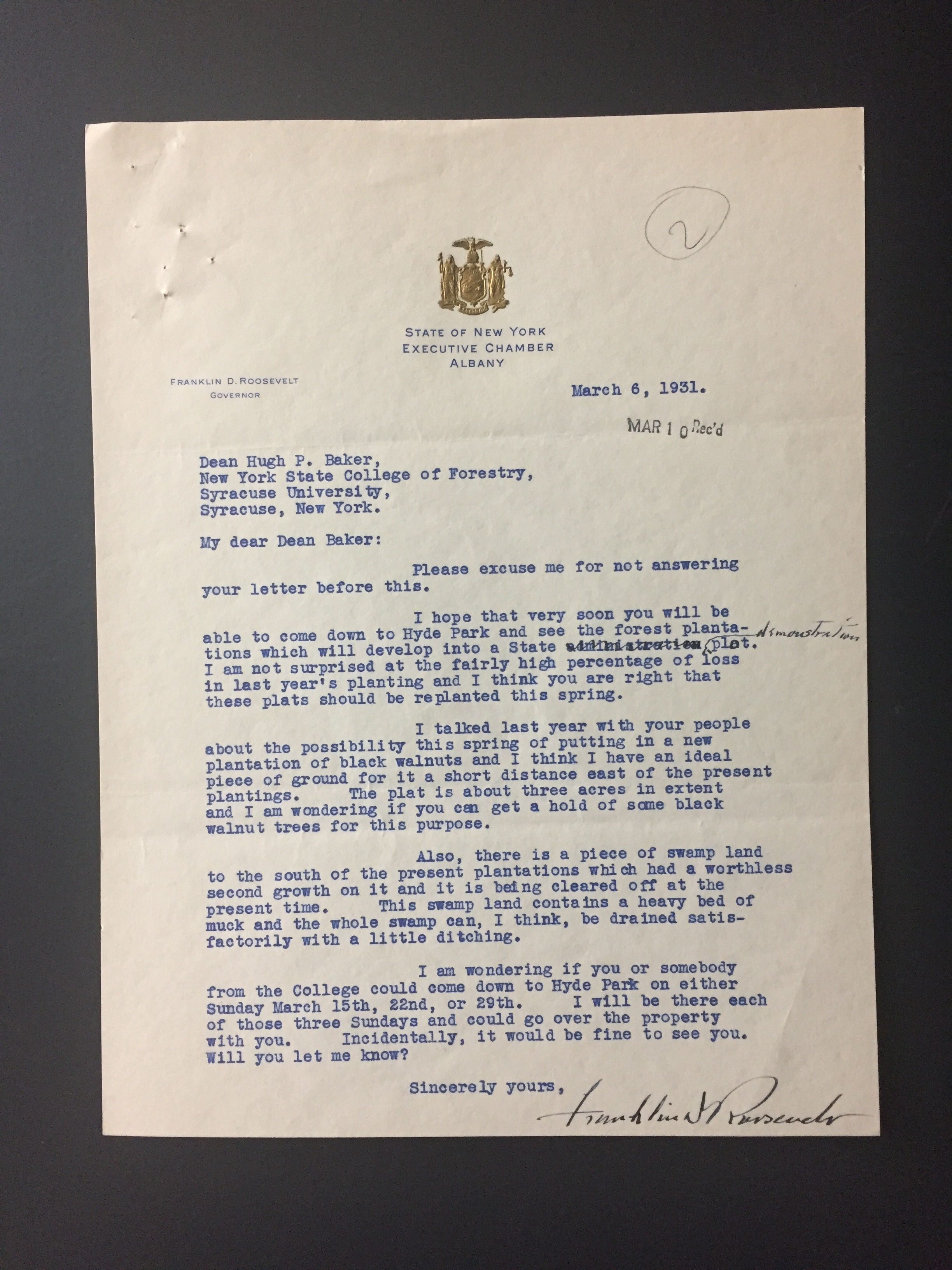 The Earth Day website http://www.earthday.org/about/the-history-of-earth-day/ gives a complete history of Earth Day and states that “The idea for a national day to focus on the environment came to Earth Day founder Gaylord Nelson, then a U.S. Senator from Wisconsin, after witnessing the ravages of the 1969 massive oil spill in Santa Barbara, California. Inspired by the student anti-war movement, he realized that if he could infuse that energy with an emerging public consciousness about air and water pollution, it would force environmental protection onto the national political agenda. Senator Nelson announced the idea for a “national teach-in on the environment” to the national media.”

At the same time in 1970 - the SUNY ESF Knothole covered the Earth Day teach-ins and reported that “Governor Rockefeller offered state resources to assist the Earth Day teach-ins being scheduled at colleges and schools through the state on April 22, 1970. Governor Rockefeller stated that “The Teach-Ins are an exciting new development which brings to bear the imagination and zeal of the young on environmental problems.” And so on April 22, 1970 SUNY ESF held an Earth Day Teach-In Lecture by Mr. Richard Pough, President of the Natural Areas Council.

You can read the April 1970 issue of the SUNY ESF Knothole and more Knotholes to learn more about past Earth Day and Earth Week celebration on campus online at Digital Commons @ ESF http://digitalcommons.esf.edu/

The F. Franklin Moon Library also currently  has a display of photographs from past Earth Week celebrations on the SUNY ESF campus from 1986 to the present. 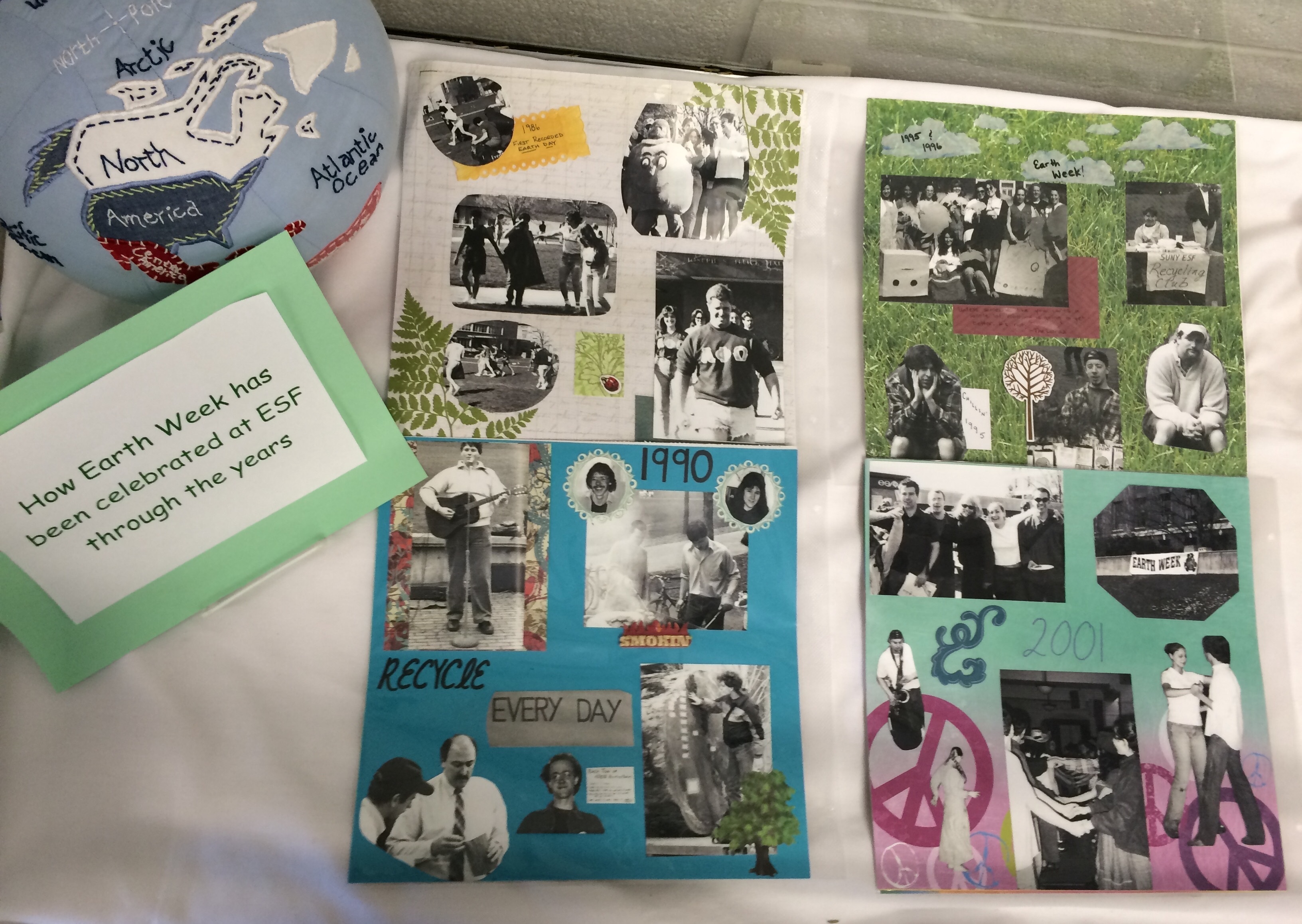 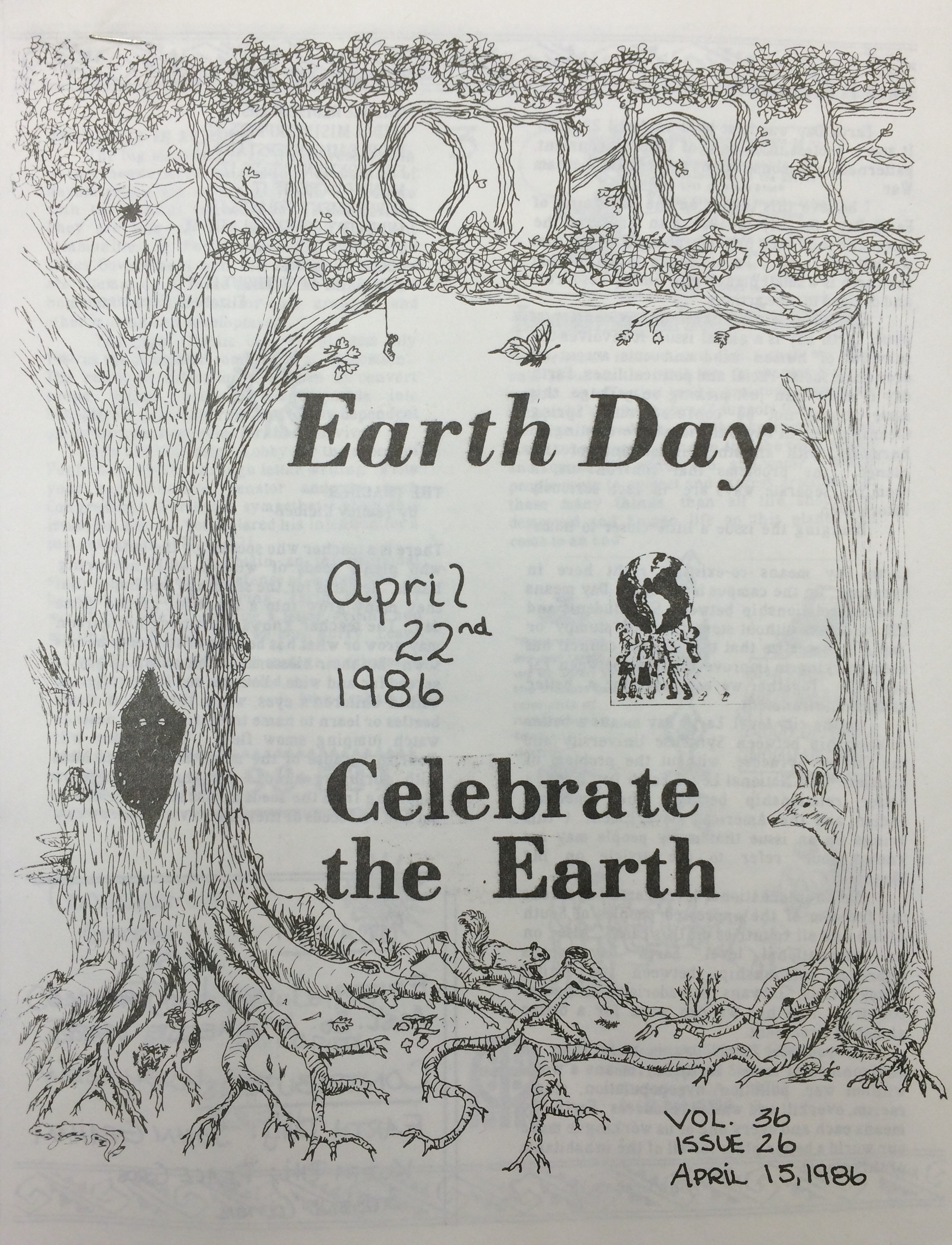 As our classes are coming to an end this semester and we look to graduation - let’s take a look back at the very first full 4-year graduating class from The New York State College of Forestry. Below is a photo of the class of 1915.

From the 1914-1915 Empire Forester – the first yearbook for the New York State College of Forestry here is some history about our college:

The yearbook also notes that in the Fall of 1914 total enrollment was 252, which at the time was the largest registration of any school of forestry in the country!

The yearbook also has some humorous creative writing pieces by our students such as the “Ballad of the Black Fly” and “The Foresters Ten Commandments”. 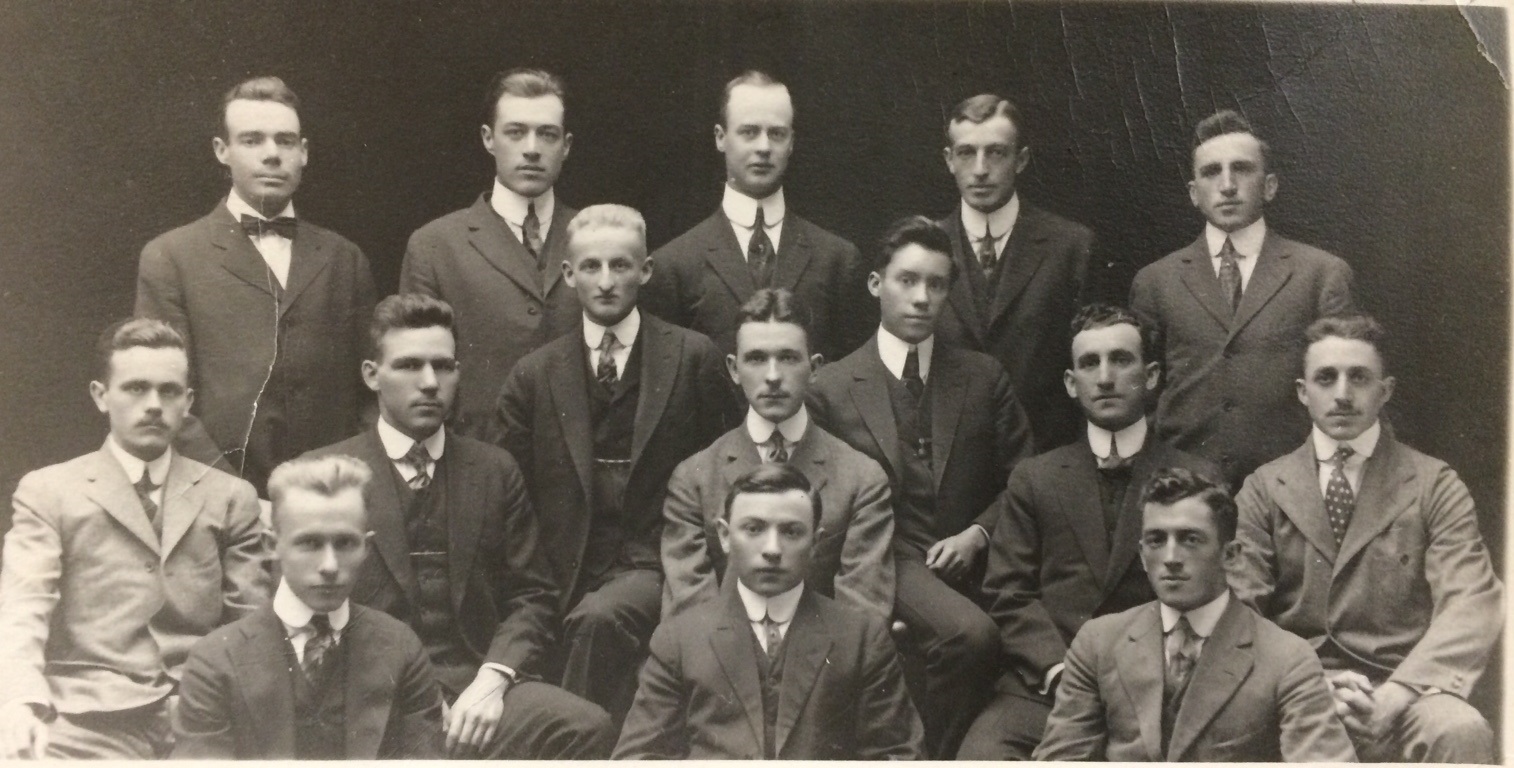